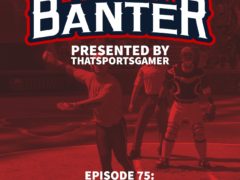 This week on Bullpen Banter Kris (SnaggleJ) and I have dove into MLB The Show 18 and are ready to give an in progress review of the game. Posts we… Read more »

Everyone knows a good sports gamer loves a good sports simulation game, but every now and then, you need to unwind with an arcade game. RBI Baseball tried to fill that void… Read more »

The 98th episode of the Press Row Podcast is one of our most-anticipated shows of the year. Host Rich Grisham is joined by regular panelists Kat Bailey, Bryan Wiedey, Chris… Read more »

The most apt word to describe diving into iOOTP Baseball 2013 for the first time as someone new to text-based sim management games is “overwhelming.” It’s not that the UI… Read more »

Fans of sports simulation games are tough to please. They demand the most realistic systems in their games, and woe unto the game that fails to deliver on that goal…. Read more »

[quote style=”boxed”]The de facto standard in video game baseball from Sony is back and MLB 13: The Show does not disappoint. MLB 13 could easily have sat back and rested… Read more »

With Tiger Woods PGA Tour 14, EA Sports is attempting to leap into the rarefied air of sports games like NBA 2K12 by mixing in great gameplay of today, while mixing in… Read more »

Formula One racing is back on the Xbox 360 platform with the demo release of F1 2012 earlier this week. The demo drops only eight days before the game is… Read more »