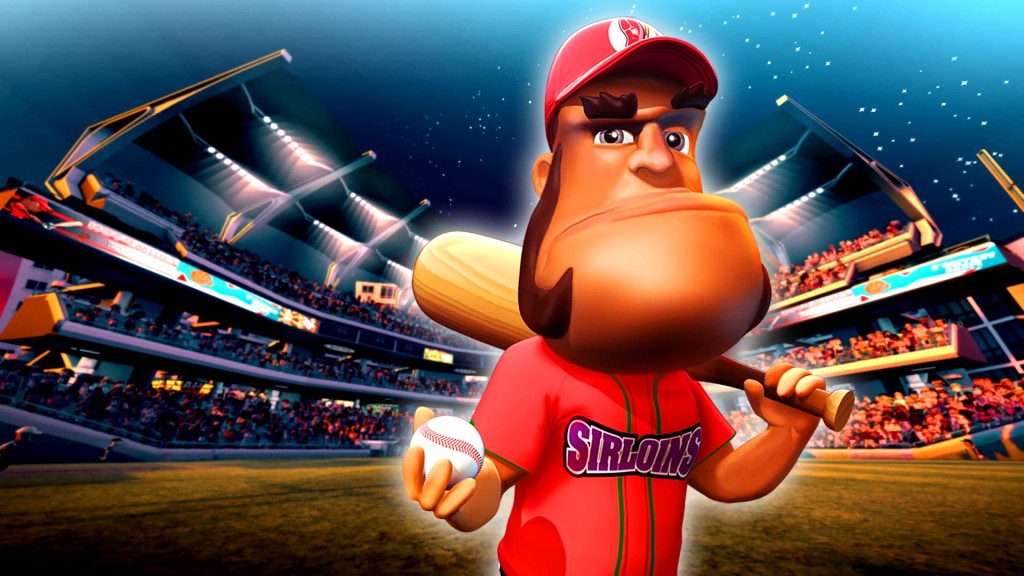 Everyone knows a good sports gamer loves a good sports simulation game, but every now and then, you need to unwind with an arcade game. RBI Baseball tried to fill that void last year, bringing with it, official licensed teams and players in what was supposed to be a sized-down, yet fun setting.

That game flopped, partly thanks to being greatly overshadowed by the SONY exclusive of Super Mega Baseball.

This fun, unique, bite-sized baseball game is the arcade sports gamer’s dream. Easy enough to pick up and play (perfect for couch co-op), but difficult to master. Gamers on both the PS3 and PS4 played enough of it, that it is now getting a sort of “Game of the Year” release on both the Xbox One and the PC (via Steam).

You won’t be jacking homers with A-Rod, but trust me, you’ll begin to grow attached to the crazy-named players on teams like the Moonstars and the Sirloins (complete with a raw steak logo).

Each team has their own strengths, so once you play with a couple, you’ll probably find the team you do best with and stick with them. For me, it’s the Herbisaurs, who have a lot of speed that lets my big-headed players take extra-extra bases when they make solid contact.

Speaking of making solid contact, it really isn’t all that hard. While hitting does rely on both aiming and timing, none of the pitches I’ve faced seemed prohibitively fast, so I’ve mostly been able to at least put the ball in play, and have only struck out a handful of times.

Now, while that might sound like a travesty to a hardcore stats-loving sports gamer, if you take a step back and just have fun with it, you’ll realize that striking out just isn’t fun. 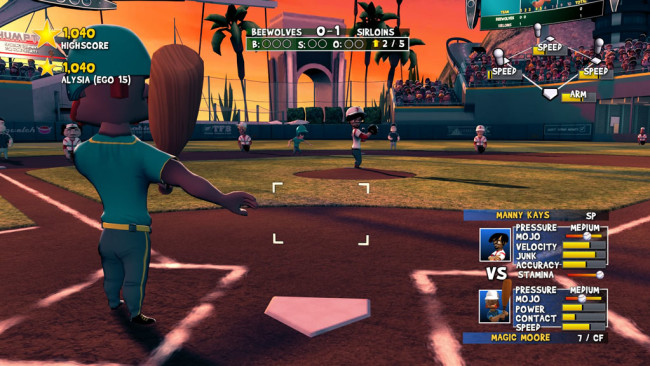 On the other side of the plate, pitching also doesn’t seem too hard, but again, it is tough to master. Picking spots is easy enough if you aren’t all concerned with how much movement you’re putting on something like a slider, but if you really want to give it a good Randy Johnson, it might take a bit to get the hang of the timing and aiming system in order to actually put that backdoor slider in the door.

When people do hit off you is when the game hit a snag for me. Fielding seemed a bit weird, especially with how slow some players are or how out of position they felt. But luckily, these issues rarely cropped up, and didn’t annoy me too much before I got back to the fun of dropping in a 12-6 curveball or jacking a homer into one of the six stadiums in Super Mega Baseball: Extra Innings.

Apart from the odd way you control your players defensively, difficulty can also play a part via two factors. The first is mojo. As seen in the screenshot above, this affects individual players and is basically a confidence meter. Some players start off super confident and have to perform very well to keep playing at that level, but some player have low confidence and can greatly benefit by getting a stat boost from string a couple of singles together.

The big part of the game’s difficulty comes from its ego system, however. As a player, you will choose how big your ego is (0-99). And the higher it is, the harder the game is. So, if you find the game too easy at first, maybe you need to match the in-game ego to yours. For me, it was hard to find a sweet spot where I felt sufficiently challenged while I could still have fun, but I have been bouncing between 40 and 60.

It does seem weird to me that each team doesn’t have it’s own home field, I’ll let it slide for a $20 downloadable game. Another thing missing from the game is any sort of online play. It seemed on for a game released in this console generation to only have local multiplayer but not support playing against a friend over the Internet.

Besides playing the exhibition modes, there is also a very well put together franchise mode that can span from 16-48 games that has all of the basics in terms of stats. It also lets you hire trainers and coaches and equip different gear to help give your players attribute boosts. Following the season, there are also playoffs. A pleasant surprise for a budget title.

If you like sports games and have an Xbox One or PC, I can’t imagine why you shouldn’t be picking up Super Mega Baseball: Extra Innings right on release date unless online multiplayer is a must have.

*The game in this review was provided by the manufacturer.