We took a couple of hits to our rotation recently. deGrom went down for 6 weeks with back spasms, Wheeler is out for a couple of weeks with a sore… Read more » 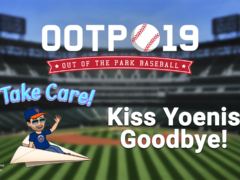