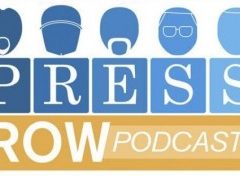 Team-building modes in sports games are intended to be played for months on end, if not year-round, making them initially tough to assess when in the early days following their… Read more »

The 98th episode of the Press Row Podcast is one of our most-anticipated shows of the year. Host Rich Grisham is joined by regular panelists Kat Bailey, Bryan Wiedey, Chris… Read more »

EA Sports has now confirmed that there is no EASHL or GM Connected modes in NHL 15 on Xbox One and PS4. The panel discusses what is tremendously bad news… Read more »

I was lucky enough to tag along with Rich Grisham (@RichGrisham) to see the EA Summer Showcase in New York City. We had a great time, got to play FIFA… Read more »

Bryan (@PastaPadre) and I discuss EA Sports UFC and some other things with Rich Grisham.