FIFA 13 is coming exactly one year after FIFA 12, and I have been excited for it since I got through a couple of seasons in Career Mode. The Tactical Defending was a great addition, but dribbling was still fairly awkward, even with the new system, and collisions still suffered. I only considered one out of the big three new features of FIFA 12 as a success, and this left me wanting much more.

The 2013 edition of FIFA will have five supposed game-changing additions that are supposed to make leaps, if not, bounds, in making the game more realistic. First off is the new “Attacking Intelligence”, which will make players feel as if they are not alone out there, as the AI on the their team will make much smarter supporting runs. Next, there is Complete Dribbling, which will offer more control for when your player will actually touch the ball. This should make for the ability to perform much more complicated (and fun) moves. First Touch Control, which has been a real pet peeve of mine since 2008 is finally being improved, meaning you can better tell your player where to go and what to do when he first takes the ball in. 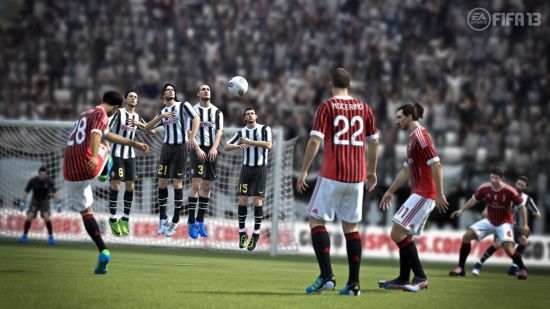 Tactical Free Kicks will also be fixing a big pet peeve of mine, actually giving life to your team during set piece opportunities instead of them just standing around. And lastly, there is a new Player Impact Engine, which will hopefully add more realism when players collide. While the terrible rag-doll physics are funny the first time you play, or when you’re drunk, they just get annoying when you’re sitting their playing Career Mode and wondering just how Messi broke his arm and is out for 8 weeks when all he did was get slide tackled from behind.

While those are being billed as the “big 5”, there are also a couple of other features being added that I’ve taken a good bit of interest in. Specifically, the new way the transfers are going to be handled. Player morale and form will be taken into account in figuring out a player’s true market value, and it looks like you will be able to transfer more than one player at once. Another interesting thing that did receive a lot of rumor press for a while was the Kinect support. While it is being added into the game, if you try to curse out the ref for a stupid call, you will not be carded in the game. Instead, Martin Tyler will probably make a comment about the manager (you), and you will also earn a salty reputation as a manager. You will also be able to set custom tactics to voice controls and even call for the ball or tell your teammate to shoot via the Kinect in Be-A-Pro mode.

FIFA might be starting to toe the line between realistic and fun, but I think this year’s installment will still provide both. Staying away from Kinect motion controls for the game seems like a good call, as it could just turn into Kinect Sports all over again. With over a month to go until release, I still have a lot of anticipating and thinking to do about the game. Come back next week for some more thoughts on FIFA 13.