We are fully in the thick of things and EA Sports’ fall releases are going to be coming fast and furious over the next few weeks. This weeks release is the demo of NHL 13 on Xbox and PS3 (8/23).

In the demo there are three modes you can take part in. Play Now puts you in the 3rd period of an exhibition between the Los Angeles Kings and New Jersey Devils. Hockey Ultimate Team lets you build your fantasy team of players to compete in a four game tournament. NHL Moments Live let to relive the final period of Game 5 of the Western Conference finals between the aforementioned L.A. Kings and Phoenix Coyotes. All in all, a well rounded demo selection. 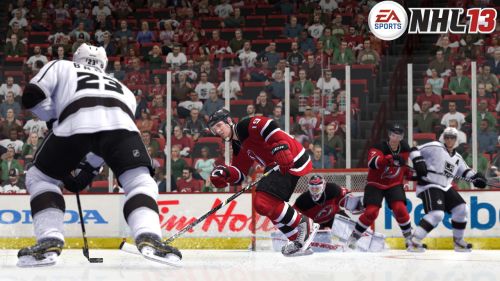 On the ice NHL 13 plays and feels a lot like previous incarnations of the series. Thankfully there are some much needed changes, including what looks like a more aware goaltender that will limit the effectiveness of one-timers that are passed across the crease. In the past, this was almost a “money-play”, now it looks like that has been someone fixed. It also felt like the ice was more open to allow passing around the offensive zone. In the past I always felt pressured to take the shot, but now I feel as if you can settle down in the zone and pass around until you get an open look on net.

The only downsides to the on the ice play was that if felt like the action was moving a little slow. Thankfully this setting is something you can bump up in the retail release, and that will probably be the first thing I do. It doesn’t need a huge tweet, but just a minor step or two up from the default. Secondly, I felt that the difficulty was a less challenging than in years past, which is interesting, seeing as last year, most people believed all the difficulties have been bumped up a bit. I’m no NHL great, I can assure you of that, but even playing on Superstar difficulty (the highest) that the computer wasn’t scoring often on me. In years past, if I would crank the difficulty up that high, I’d be down a goal or two pretty quickly.

The one oddity about the Play Now mode was that there was no overtime. Whats even more confusing is that there is overtime in NHL Moments Live, and I know that because I went into 6 of them. 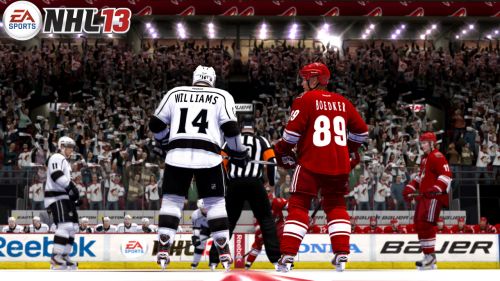 NHL Moments Live is similar to Madden Moments and other “Moments” modes in EAs other games. A real life scenario is shown in a video, for the demo they used the L.A. Kings late game win over the Coyotes to send them into the Stanley Cup. This is a fun mode, even though I think one run through it lasted longer for me than five Play Now games because I went to 6 overtimes. It seems like a nice quick mode to hit when you don’t feel like playing a full game.

The third mode you get to experience is the Hockey Ultimate Team. This years version so far seems to be vastly superior to last years. Right off the bat the cards are redone to make it simpler to see the players Rating, Style, and Position. Last years cards were so confusing that I barely dove into the mode. For the first time I am excited for Ultimate Team in a game other than FIFA.

You should definitely go check the demo for NHL 13, if you do, and have any interest in hockey, you should be very satisfied. Let us know your thoughts on the demo in the comments below.

Also, if you are interested, make sure you head over to ThatSportsGamer.com/leagues to sign up for our NHL 13 League on Xbox 360.