Nowadays, building your own high powered gaming PC is about as common as a Starbucks in your home town. Nearly every PC gamer worth his salt has priced out, ordered, and pieced together their very own battlestation. While many people can put the pieces together, understanding what you need and what’s overboard is the harder part.

Many people go for a huge aftermarket CPU cooler, when they have no intention of overclocking their processor. What those people don’t realize is that, unless you plan on overclocking the stock heat sink is more than enough. But for those that want to fiddle and try and get every last bit of performance, an aftermarket cooler is essential.

There are two types of aftermarket coolers to choose from, and they both have their pros and cons. You can use fan cooling or water cooling. While Fan cooling is cheaper and (some would argue) easier to set up, water cooling is more efficient and much quieter.

Enter the ThermalTake Water 2.0 Extreme All-In-One Liquid Cooling System. A closed loop water cooling system with a 240mm radiator that is aimed at the high end PC power user. Until this past weekend I was cooling my 2nd generation Intel Core i7 2600K with a Hyper Evo 212+ fan cooler. I was able to run a stable overclock with it, but my temperatures were at the top of my comfort zone, running in the high 60s low 70s when under a heavy load. 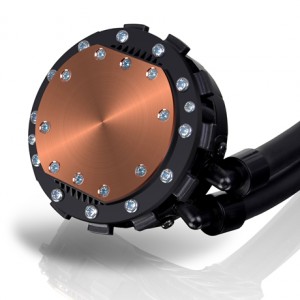 After installing the ThermalTake Water 2.0 Extreme system, I’m still running a stable overclock, but I’ve been able to get so much more. I’ve been able to push my overclock to around 5.2 GHz, a full .2 GHz more than I could before. And all that comes with temperature drops around 5-10 degrees Celsius.

Gone are the days of running tubes outside of your case to home brewed liquid concoctions, hoping that today wouldn’t be the day that one of your components sprung a leak. With ThermalTake’s Water 2.0 Extreme system, everything is self-contained. There’s not need to mix together your own liquid mixture, no need to route tubes out of your case and to the top radiator, simply install the radiator to the inside top of your case, install the fans on the radiator, mount the cooler to the top of your processor, connect the power connections and you’re done.

This is slightly easier said than done, but just barely. Everything was pretty easy other than installing the mount on the back of the motherboard. The plastic pieces felt a bit cheap at times and I was afraid of applying too much force. In the end everything installed easily enough, though it would be a project I would enlist a second pair of hands in if I had it to do over. 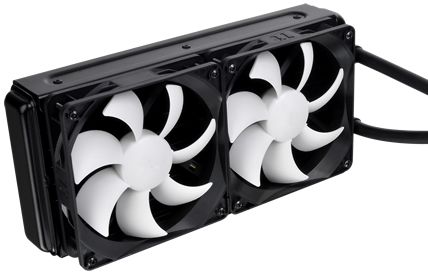 The stock fans that come with the unit are high performance fans, meaning they aren’t the quietest things around. The sound level is acceptable, but you can easily spend $10-15 for some “silent” fans to lower the volume even more.

The closed loop system does come with fan control software, which is nice. It’s not the worst included software I’ve ever used, but it’s not the best. It does the job, gives you the options you want, but doesn’t present them in an overly pleasing way. I also found that the readings weren’t always accurate. Using multiple programs to monitor internal case temperatures, the ThermalTake software would be 2-3 degrees off. Once I restarted the program the temperatures would even out, but I shouldn’t have to restart the included software to get accurate readings.

The Thermaltake Water 2.0 Extreme Closed Loop Liquid Cooling System retails for $129.99 (Amazon). The big question is whether it’s worth a purchase, and the answer is yes and no. You really need to look at what you want out of your computer. If you want to squeeze every last bit of potential from your unlocked processor, than this is one of the simplest and more effective systems to do that. If you’re a gamer and just want better frame rates, your money would be better spent on a video card upgrade and an air cooling system for your processor.