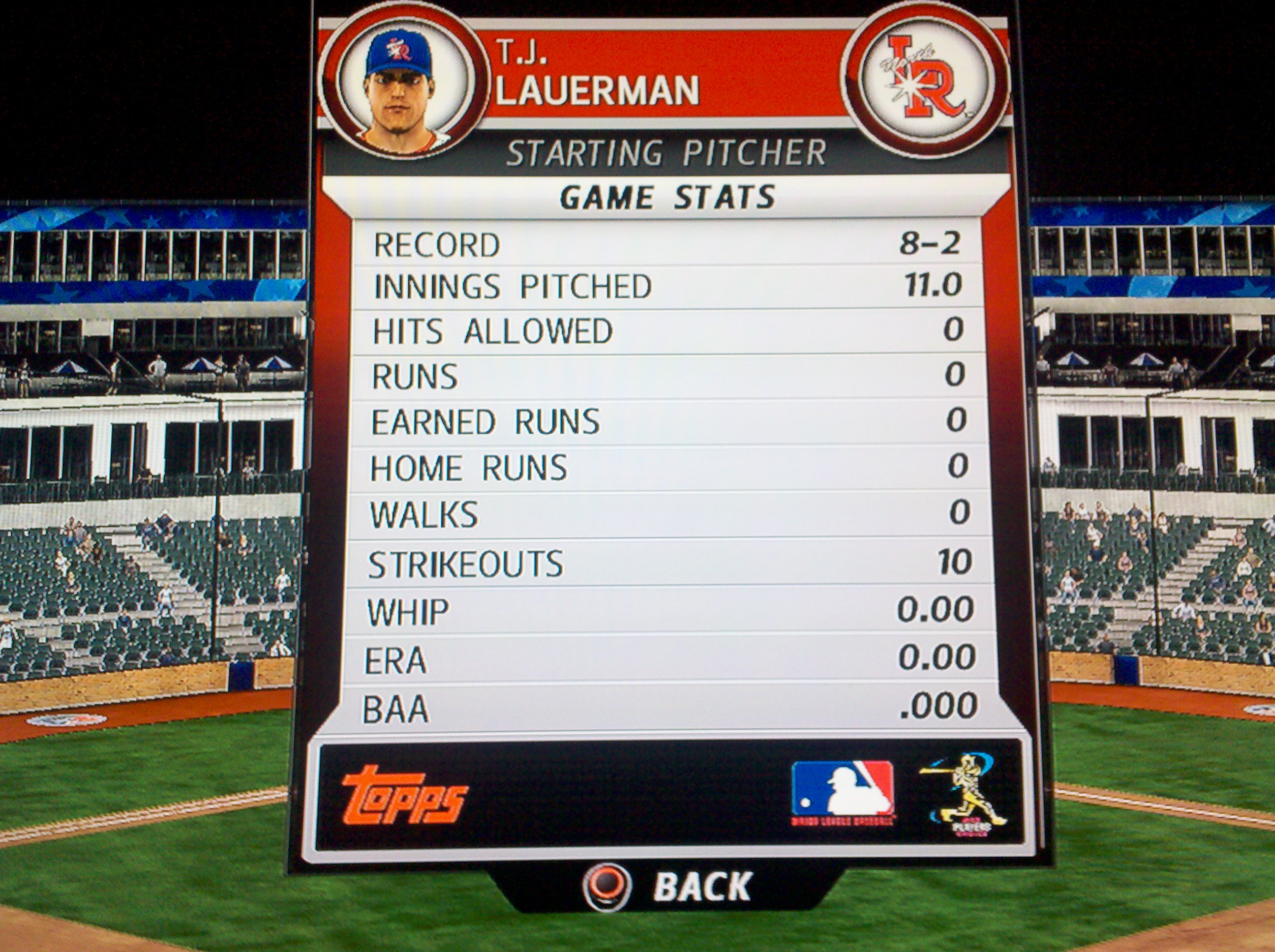 April 25th, 2011, a day that will live on in my video game memory banks forever. After a normal Monday of work and my usual 45 minute drive home, I arrived to notice my wife hadn’t arrived yet. So I did what any good husband does and fed our two dogs, Rocky and Maddux (named after Cubs and Braves great Greg Maddux). Once the boys finished eating I had some time to myself so I decided to do what any man would do with some free time, play video games.

I sat myself in the living room, turned on my PS3 and popped on MLB 11: The Show. Playing as my virtual-self in Road To The Show is easily my favorite aspect of Sony’s MLB series. As a starting pitcher for the Los Angeles Angels of Anaheim’s Double A team, the Arkansas Travelers, I took my turn in the rotation against the cross state rival, the Northwest Arkansas Naturals.

With a 7-2 record going into the game, I had been cruising through the ranks of Double A faster than I had done in previous seasons and assumed this, my first year, would eventually lead to a call up to not only Triple A, but possibly all the way up to the majors. While by year’s end I was on the pro club, even that could not top what would happen on this fateful night.

After going deep into counts on the first few batters I quickly noticed that this game wouldn’t be the cake walk I was hoping for in route to the Double A All Star Game. While I had let up no hits through the first few innings, thanks to some nice defensive plays, I was still weary since my offense had not provided any runs. In the 5th inning a routine grounder was hit to Brandon Wood, which seemed like it would end the inning until he bobbled it for an error, leading to the first base-runner of the game. Luckily I struck out the next batter and escaped unharmed. 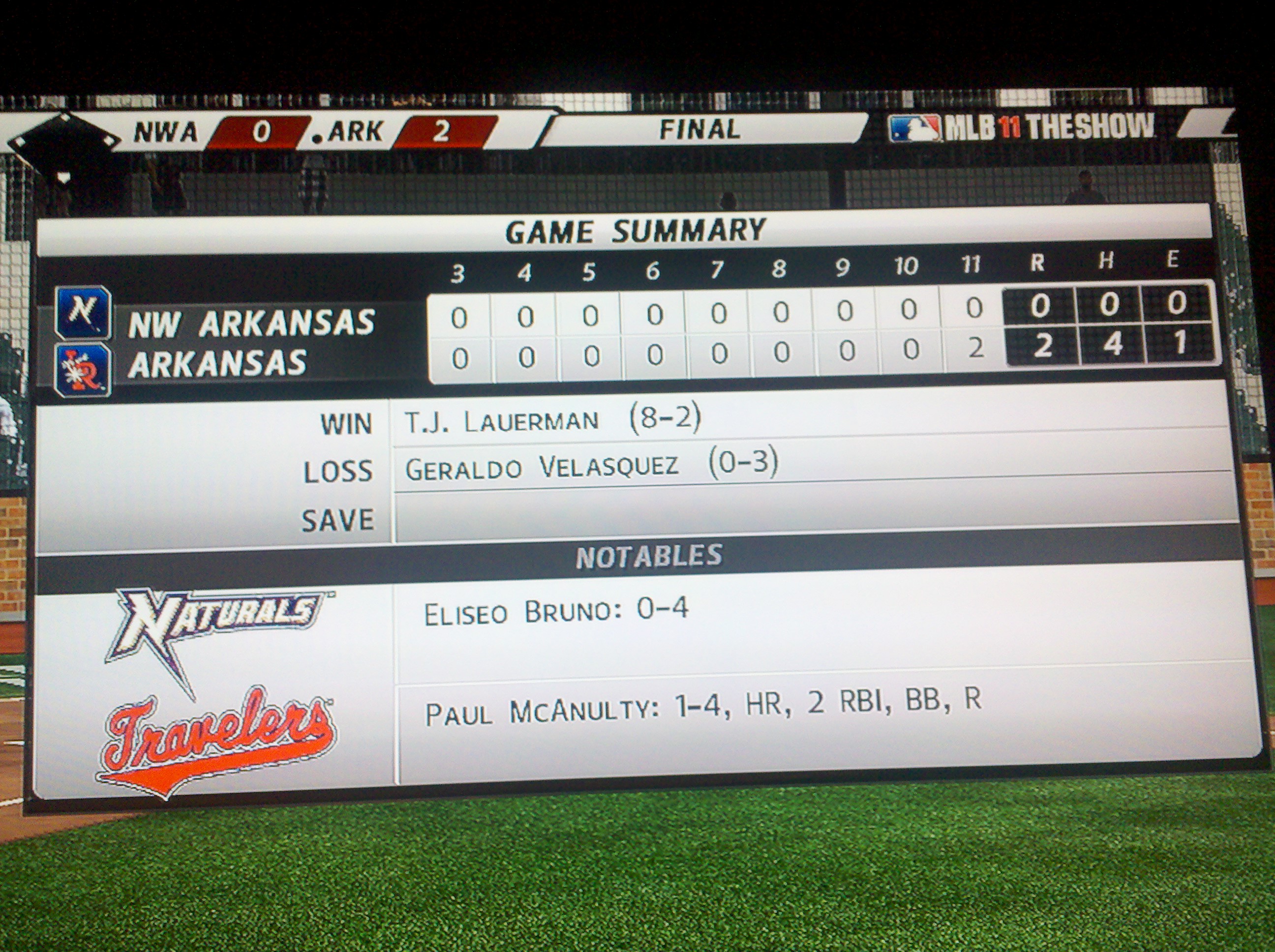 While still coasting through the game, around the 7th inning I noticed that I had a legitimate shot at getting the ever elusive no-hitter. I’ve been playing baseball video games since Bases Loaded on the NES, and have never thrown a no-no. There were two times when I came so close that it hurts, surprisingly, both times came in rapid succession. I kid you not, in MLB 2000, twice I got to the bottom of the 9th with two outs pitching with Randy Johnson against the Pittsburgh Pirates, only to let up a hit to pinch-hitting Al Martin both times.  Tragedy.

I would not allow that to happen again. This time I was using “cyber-me” and I won’t let myself down. However one thing became abundantly clear, while I was pitching great, my teams offense was anemic, and time was running out. With zeros on the board in the 8th, I needed the offense to come through to set me up for a victory. They failed.

So on to the 9th, with little stamina I managed to escape quickly with a 7 pitch inning. While quick, it was also terrifying. Two deep fly balls  nearly reached the warning track, which terrified me. With my team coming up I was praying for a miracle. However, I did not get one.

Assuming the next screen would take my to the end of the game I was stunned to see myself left in for the top of the 10th inning. Still scared from the hard hits of the 9th inning I bared down, knowing today would be my day. I put the Naturals away in the 10th with 2 strikeouts and a weak ground ball to second.

Knowing that only a few pitchers have ever pitched 11 innings in a game, and even less to win those games (see Harvey Haddix),  I knew that my team had to come through for me in the bottom of the 10th. Did they? No, yet again they went down I was sent out to the mound with nearly no stamina left, and like a champion, I made quick work of the Naturals’ batters. After 11 no-hit, no-walk innings, I still needed a miracle.

Finally, in the bottom of the 11th, the Arkansas Travelers’ bats came to life. After getting a man on-base, former Dirtbag, Paul McAnulty came to plate. A career .296 hitter in the minors who hasn’t been able to stay up in the majors, knew tonight was special. Having hit over 125 home runs in the minors, there was no supise when he drove a ball deep into the right field stands and sending out team into victory.

As the game advanced to the end and I saw the final box score I jumped out of my chair. This is my proudest moment in sports gaming history. There are other moments that come close, but nothing can compare to an acomplishment made with your own personal created player. A 96-yard TD run with Jamal Lewis is great, but that is still based on Jamal Lewis, the real player that has played for years, and not your digital self, that you brought up and groomed.

These are the moments that make video games special.