Keep in mind that I know nothing of NCAA basketball. Maybe if someone put out a game I would care. 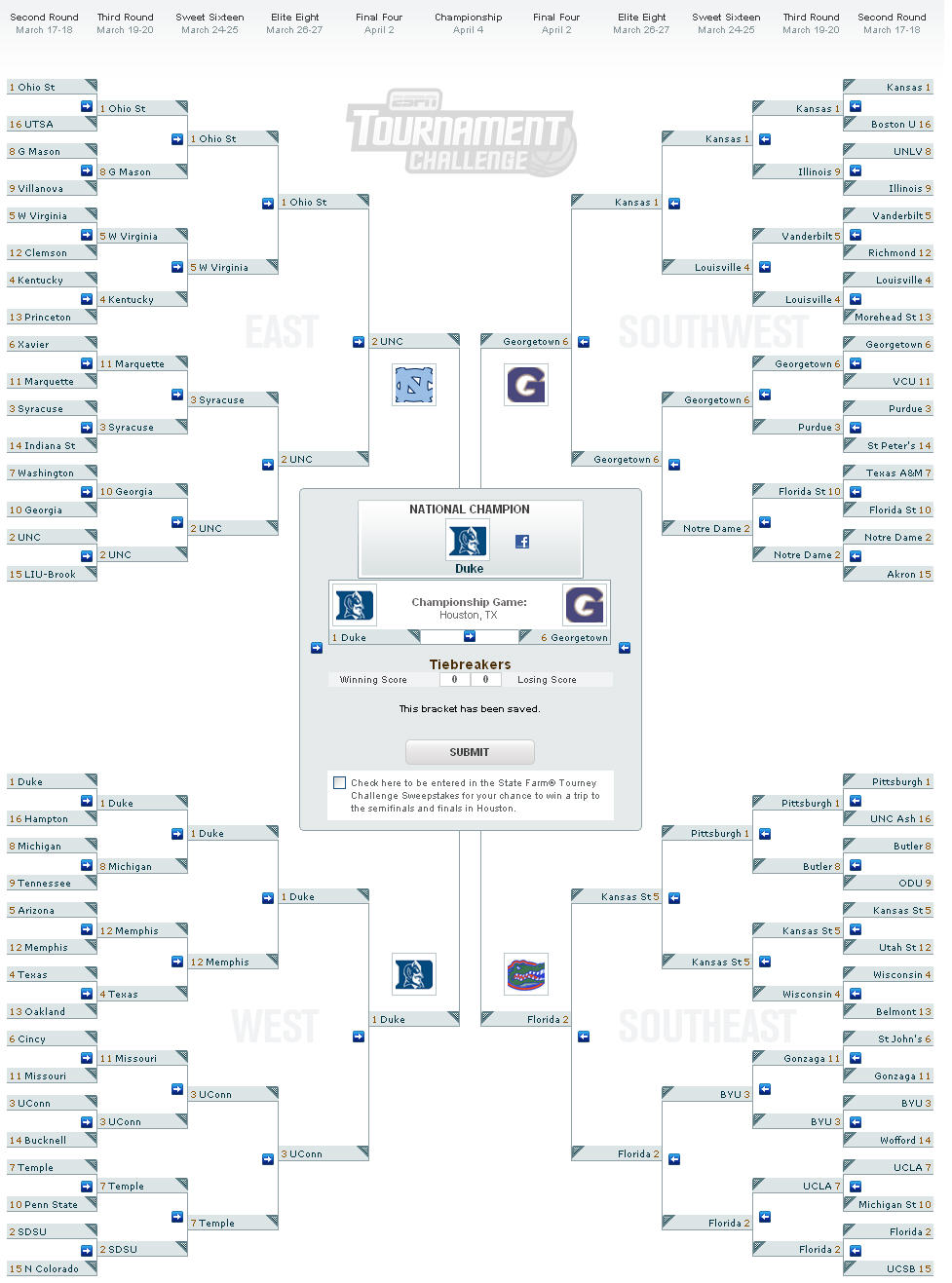 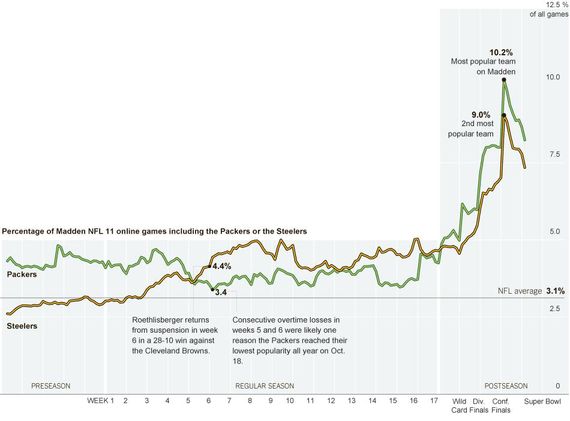 The New York Times has recently posted graphs showing what teams Madden 11 players were using in online play. As could be expected, each playoff teams usage went up as they advanced, with over 10% of players using the Green Bay Packers after their Super Bowl XLV victory.
This got me to thinking about “front runners”, mainly because I’m sure next year I will be called one, even though it’s not entirely accurate. I’ve used the Packers in online and offline franchises for the passed few years now, essentially because they play the style of game I like to play. They pass heavy, and run every now and then as shown by their 11 rushing attempts during the Super Bowl.
Since I’m more a fan of Madden‘s version of football than the actual game, in the past I could easily have been considered a front runner in the past. I was always using the top teams in the NFL because I didn’t know better. Some examples of teams I used were the Buffalo Bills in Super Tecmo Bowl,  the San Francisco 49er and Dallas Cowboys in NFL GameDay time, and the Minnesota Vikings in the NFL 2Ks.
As I’ve become more nuanced in the game of video game football, I’ve learned my strenghts (passing) and weaknesses (running) and use teams that do that successfully. That is the main reason why the Packers have been such a good team for me in recent years.
Next year I’ll be making the switch from purchasing Madden on the PS3 to the Xbox 360 after the sad realization that I bought NCAA Football 11 on Xbox 360, and obviosuly couldn’t bring over my Draft Class to Madden 11 on PS3. I can’t wait to hear all the 13 year olds on Xbox Live call me a “front runner” when I smoke them with Aaron Rodgers and the Pack.
I just can’t wait to win a game on a Rodgers to Greg Jennings TD and yell “f&ck you Gumby” after I win. 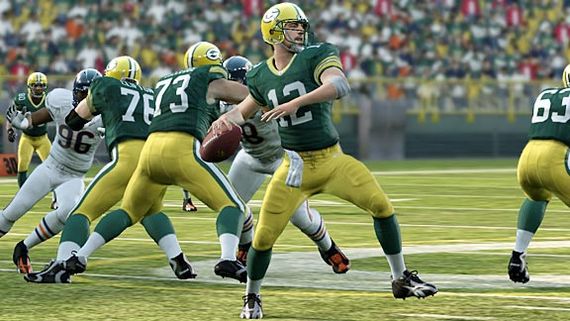 After a great ending to the 10-11 NFL season with the Green Bay Packers defeating the Pittsburgh Steelers, its about time to look at the choices for the cover athlete for Madden 12. While the offical cover athlete won’t be named until April, its always fun to speculate.

Arian Foster, RB Houston Texans – In his first full season he blew the doors off the place with 1,616 yards (thats damn near a mile). He also posted the 2nd highest Opening Day rushing total with 231 yards.  Sadly, the Texans went 6-10, and that is certainly not helping you get on the cover of Madden.

Tom Brady, QB New England Patriots – Brady played out of his mind this year.  He broke his own record for touchdown to interception ratio at 9:1 with 36TDs and only 4 INTs while racking up 3,900 yards.  Not to mention he was an All-Pro, NFL Offensive Player of the Year, oh yeah, and the unanimous choice for regular season MVP. Sadly, the loss to the Jets prolly takes away his chance at being the cover athlete, but crazier things have happened.

Clay Mathews, LB Green Bay Packers – If EA goes defense with this years cover athlete, Mathews has got to be the leading contender. He was named to 2 Pro-Bowls to start his career, finished 2nd to Troy Polamalu for NFL Defensive Player of the Year. He also forced Rashard Mendenhall to fumble while the Steelers were driving in the 4th quarter of the Super Bowl. 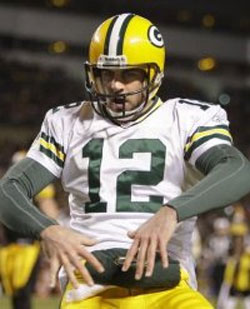 Aaron Rodgers, QB Green Bay Packers – Who was that guy on the cover of Madden 09? Brett something, but he was a bum compared to Aaron Rodgers. After throwing for 3,922 yards  and 28 TDs with a rating of 101.2, he didn’t slow down when he got to the playoffs.  Playing 4 playoff games at the #6 Wild Card team, Rodgers threw for another 1094 yards and 9 more TDs. Last but not least he was the Super Bowl XLV MVP for throwing for 304 yards and 3 TDs. If Rodgers isn’t on the cover it will be the biggest shafting in cover athlete history. 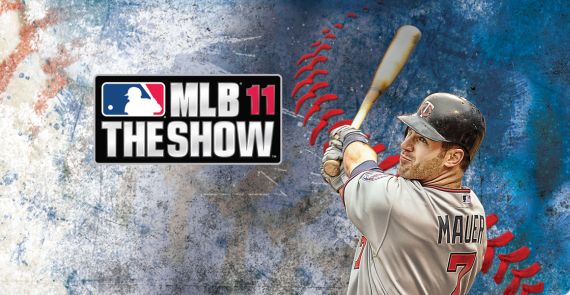 By unanimous decision Sony’s MLB 11: The Show is the ThatSportsGamer teams most anticipated sports game of 2011. While we aren’t excited about the music of the game, we are extremely excited for the game itself.

While MLB 10 was my personal second favorite sports game of 2010, FIFA 11 being number 1, I am extremely excited to see the changes coming in MLB 11. While the inclusion of analog batting and throwing controls tend to scare me, I’m pretty excited to see what Sony’s San Diego team has in store for us.

All this trailer did was confirm our excitement for this game. While there is a good chance that if this game hits it out of the park, MLB 2K11 will take a severe hit going into the future.

With 2K Sports’ exclusive 3rd party rights to the MLB expiring in 2012, if MLB 11 is amazing, and EA decides to re-enter the baseball arena, there is a chance that 2K could slip to third place. While I think MLB 11 has the potential to do that. I still stick with my 2011 prediction that MLB 2K11 will make strides, and while they won’t pass Sony’s game, they will at least give them a run for their money.

Can you be the next Wade McGilberry? Don’t remember Wade? Well, last year he won $1,000,000 from 2K Sports by being the first person to pitch a perfect game in MLB 2K10. 2K Sports is at it again with MLB 2k11‘s Perfect Your Game challenge.

While all of the official rules aren’t out yet, it can be expected that they will be roughly the same as last year. Most likely you’ll need to use a camera to record yourself playing in the ever changing MLB Today mode. After pitching a perfect game, you’ll need to burn a DVD of your performance and send it into 2K Sports or Twin Galaxies, their official record verifier. For all the official rules head over to 2K Sports’ Perfect Your Game page.

It may seem like a lot of work, but for $1,000,000 it seems worth it. As with last year, even though Wade pitched the perfect game on the day of its release, 2K kept it under wraps until May, to try to push sales by giving people a false sense of hope. 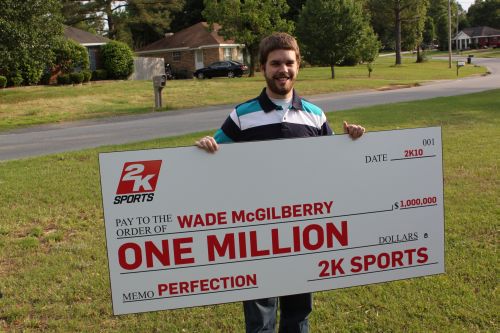 Wade thinks it was worth it.

After a year of Major League Baseball where Dallas Braden and MLB 2K11 cover athlete Roy Halladay both threw perfect games, lets not forget Armando Gallaraga’s notable nearly-perfect game, its a pretty good guess that the first perfect game of MLB 2k11 will be pitched on launch day.

If you’re up for the challenge, we wish you luck, if you happen to throw one, let us know in the comments below. 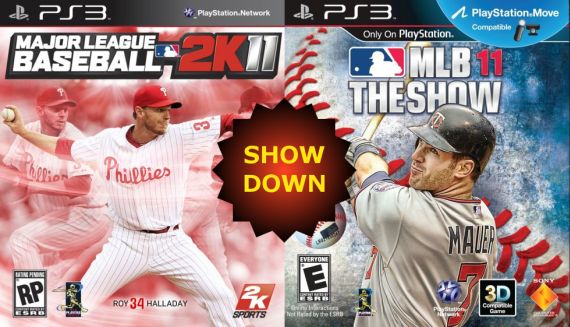 With sports video game franchises seemingly dropping off every year, its rare that we get a true cover athlete showdown. Thankfully, Major League Baseball has graced us with two top of the line players this year.

While waiting for the games to come out to decide which is better would be the logical thing, how bout we make a decision based on on the field results? So what happens when a 7-time All-Star and 2-time Cy Young Award winner faces off against a 4-time All-Star and 2009 AL MVP face off? 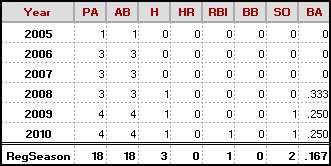 As the saying goes “good pitching always beats good hitting”. The good news is that with Halladay in the NL full time, Mauer won’t have to face him as often.  Though, maybe Joe just needed more ABs against Halladay. Aside from Rangers pitcher C.J. Wilson (.053), Mauer has a better batting average against any other pitcher he’s faced more than 18 times.

From these numbers is looks like MLB 2K11 has won the cover athlete showdown. The question is, will MLB 2K11 be a better game than MLB 11: The Show? We will find out soon.

Hello and welcome fans, I’m Ally McCoist. No actually I’m not. I’m T.J. Lauerman and this is ThatSportsGamer.com.

Along with some friends of mine, we are going to try to bring you something enjoyable to read about the world of sports and sports gaming.

Hopefully you’ll stick around, enjoy, and even drop us a line on how we can make the site the best it can be.

I obviously had to go with my @CRKernels hat for t