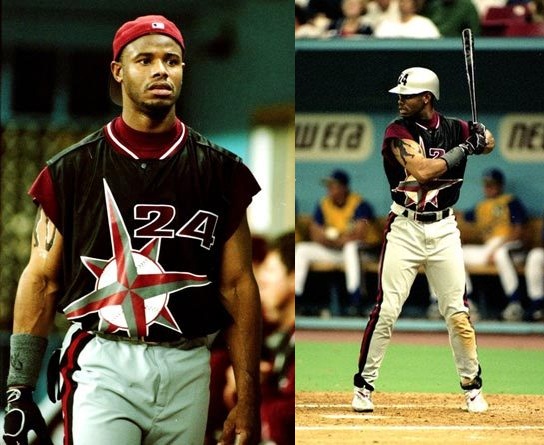 While “Turn Ahead The Clock” may have been one of the worst ideas in MLB’s history, it does give us something to talk about. In case you didn’t know, in 1999, Major League Baseball and Century 21 Real Estate had a promotion where rather than wearing retro uniforms, team would “Turn Ahead The Clock” to jerseys they would wear in future.

In the year prior, 1998, Mariners Marketing Director, Kevin Martinez brought the idea to his team to wear jerseys from 2027, which would be the teams 50th Anniversary. Ken Griffey Jr. played a crucial role in creating designing the Mariners “Turn Ahead The Clock” jerseys, even down to choosing the new colors. One of those colors being red, possibly foreshadowing his future move to the Reds?

Griffey also made some last minute changes to the jerseys once they got to the ball park. He convinced his teammates to cut the sleeves off their jerseys and spray paint their cleats silver.

While the 1999 MLB wide “Turn Ahead The Clock” was pretty much panned for being a joke, the Mariners 1998 outing was widely considered a success by the organization.