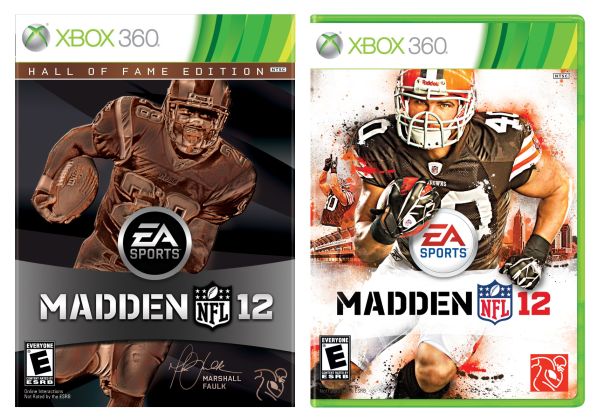 Today EA Sports released the box art for this year’s iteration of Madden NFL 12. Peyton Hillis’ cover looks quite good. He is the main image, with a smaller image of himself next to his right arm, and the city of Cincinnati next to his left.

The Hall of Fame Edition will be limited to only 125,000 copies. Along with the Madden NFL 12 game disc, you will also receive one of the autographed Marshall Faulk  cards seen below. Two lucky buyers of this edition will pull a solid 18 karat gold version of their card.

Another bonus of the Hall of Fame Edition, is an exclusive Madden Ultimate Team Platinum Pack made up of Hall of Famers and former Madden cover athletes seen here.

Of course all of these comes at a price. The Hall of Fame Edition will retail for $89.99 and is only available for PS3 and Xbox 360. Both versions will be available to pick up on August 30th.

$30 seems like a big hit above the the regular price of $59.99, but depending on what deals are at Amazon and other retailers, it might be worth it.