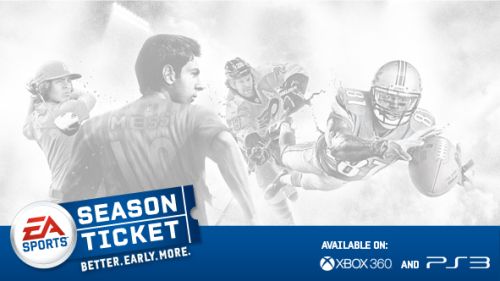 As the earliest adopters of EA Sports Season Ticket begin to get messages that it is almost time to re-up, EA has decided to expand what users get out of the service. This was perfectly timed, as most people began getting notifications that their Season Ticket would soon be expiring, the discussion of if the service was worth the $25 price tag began.

Two main things transfer over from last year, users will get a 20$ discount off any paid DLC for the selected titles (NCAA Football, Madden, FIFA, Tiger Woods, NHL) as well as access to a downloadable version of the selected titles during the weekend prior to those games retail releases. This year EA is throwing in over $100 worth of in-game DLC.

As someone who was on the cusp of not renewing their Season Ticket, I think EA did just enough to make Season Ticket worth it to me. After going on a FIFA 12 FUT spending spree, I have decided not to spend money on Ultimate Team packs. This is a good work around for me. With this and GameStop’s pre-order bonus, I will now have 48-gold packs coming to me. This also give me a good starting point to get into FUT and HUT.