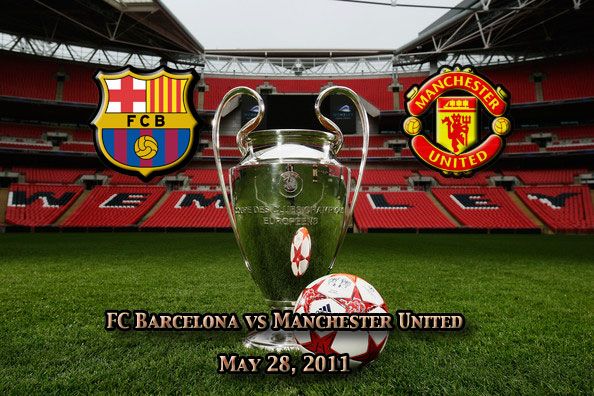 At 2:45PM EST today FC Barcelona will take the pitch against Manchester United. Whichever team wins will be the proud winner of the double, since both teams have won already won their respective leagues. Let’s take a look at what happens on the virtual pitch before watching the real game.

With these teams being among the best in the world it’s no surprise what a hard fought game this turned out to be. The first half was nearly all about Manchester United’s defense. Every time Messi got control of the ball, the Manchester defense smoothed him. The few time he was able to get free Edwin van der Sar, like a brick wall denied him.

The second half was the mirror opposite of the first, and for the game possession was nearly split down the middle.  While Pujol and the rest of the Barcelona defense put up a great fight, they were powerless when it came to a Manchester bounce off of a Víctor Valdés block. In the 75th minute, Dimitar Berbatov was able to sneak pass the defenders and put a solid shot on goal only to have it blocked by Valdés. However, the block sent the ball into the center of the penalty box where Wayne Rooney was eagerly awaiting to score on a header.

Barcelona got a late shot off, but today, in van der Sar’s last game before retirement, it was stopped giving Manchester United win.

Today’s game should be one of the best football games ever played. Both teams are going for their 4th European Cup/UEFA Champions League win. Both are going for a double, FC Barcelona already has 3, while Manchester United has 2. This is also a remake from the 2009 UEFA Champions League Final.  No questions asked, if you’re a football fan, you need to bet watching this game.