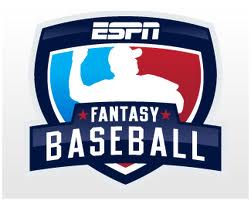 Tonight is the night of the draft for my Fantasy Baseball league. In that league we use pretty standard scoring procedures, but what I want to tell you about now is the Trash League that myself and Jeff Sherman created.

The point of the trash league is to pick good players that perform statistically awful. Scoring in the Trash League is pretty simple, you gain points by performing bad by striking out, hitting into double plays, making errors, losing your start or blowing a save etc.

As a general rule we determined that te players selected must be “big name” players. People the average fan should know. The antithesis of this league scoring was to make Mark Reynolds and Adam Dunn the best fantasy players. That worked out well because Mark Reynolds was projected to score the most points this year (and he was the 1st overall pick. Adam Dunn is projected to be a top 10 player.

Here is an exact breakdown of the scoring system. 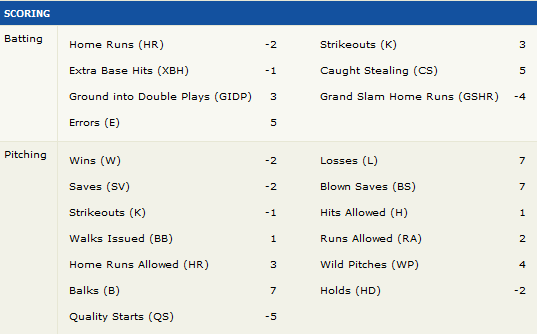 Since this is kind of a joke league we decided to keep the rosters to a bare minimum with only 16 players (C, 1B, 2B, 3B, SS, 3 OF positions and 8 pitchers). These choices were also made so that we didn’t need to keep checking in everyday and making subs.

ESPN sets the minimum amount of teams in a league to four. So we both had to draft two teams. Here are mine. 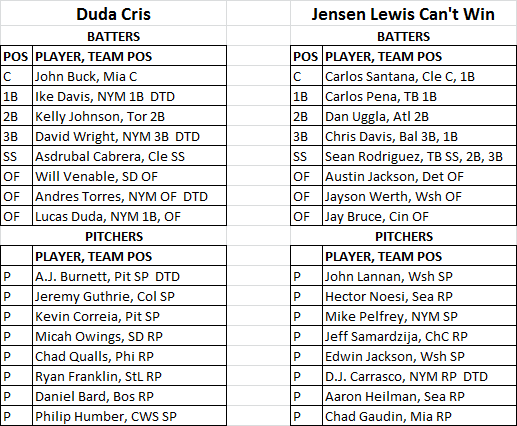 You can also see Jeff’s team on his blog, Twenty Three’s Thoughts.

Good luck in all your leagues, and maybe thing about doing one like this just to change it up a little bit.