On September 7, 2010 at 12:15am, with my wife asleep, and after hours of debating on a name, I purchased ThatSportsGamer.com from GoDaddy.

The Name – I was writing for GameRant.com and at some point decided that I wanted to have a Twitter account dedicated to talking about the stuff I was writing about, separate from my personal account. It took a while to come up with a name but I ended up taking “That” from, NJ hero, Kevin Smith’s Twitter handle, @ThatKevinSmith, and “SportsGamer” from Todd Zuniga‘s 1UP podcast cast “The Sports Game Guy’s Sports Anomaly“.

The Inspiration – There are three main people who I’ve tried to model ThatSportsGamer around:

The Tweets – I’m a huge fan of Twitter, as the 110,000+ tweets can attest. I feel it’s a great platform for conversation even with it’s given limitations. Having 5,000 people follow me to hear my thoughts is pretty mind blowing, and I thank them for sticking around and growing the ThatSportsGamer community.

The Community – You are amazing. In two months I’ll be doing my 7th Extra Life Charity Gaming Marathon. Since I started, with your help, I’ve raised over $6,000 for the Children’s Specialized Hospital of NJ, and many of you have teamed up as part of TSG Crew to raise over $32,000 together for Children’s Miracle Network Hospitals across North America. Thank you all so much.

The Cohorts – So many people have helped make ThatSportsGamer what it is. Scott Bins let me talk his ear of for nearly 100 episodes of ThatSportsGamer Show. Jeff Sherman is always there for me to bounce ideas off of and to blow off steam. Rich Grisham for always being there to push me, and bringing me on as Community Manager for Out of the Park Developments. Zach Farley and Stephen Gibbons for the parking lot chats. There are so many other people that help me work on projects and keep me sane, and I really appreciate all of you. 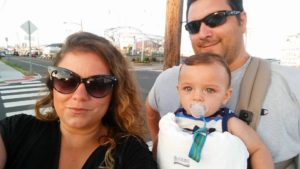 Most importantly, my #1 cohort, my wife, Erika, who is always there to support me in making these things happen. Even though it’s been stressful, like the time I went to EA Tiburon, in sunny Florida, and left her to dig out a New Jersey snow storm on her own, she’s always been by my side. In the 6 years since ThatSportsGamer started, we’ve bought a house and had a child, and she’s been amazing through every second of it.

The Future – I still love playing sports games, and while the number of them has slimmed, my passion for them continues to grow. I’ll continue to make written, audio, and video content. I’m learning to use Premiere Pro, so hopefully you’ll be seeing better quality videos on my YouTube channel. I also love doing the streams, for my schedule you can go to ThatSportsGamer.com/Schedule.

Thank you all so much.